A practical guide of bill of lading for Seafarers

If you ask me to name one document that is most important in shipping trade, I would name it as Bill of Lading. Banks do not issue funds, if the bill of lading is not clean.  Carrier do not release the cargo if they do not receive bill of lading. And carrier cannot escape from claim of liability for cargo damage against clean bill of lading. The commercial aspect of shipping trade revolves around bill of lading. It is thus important for Masters to be aware of all the situations they can be subjected to and how they should deal with such situations. 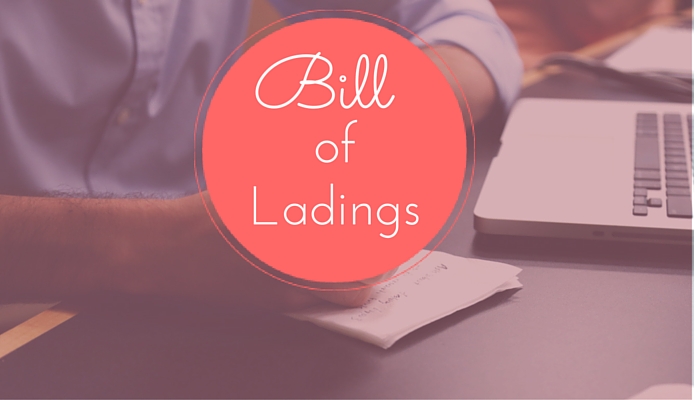 I am covering these in 3 sections

1. Issuing Letter of Authorisation to agents for signing bill of ladings

1) Bill of lading quantity not ready before vessel’s departure. This is particularly the case where EDP (Early departure procedure) is excercised. One such example is loading of crude oil in the port of Rastanura where EDP is common and vessel has to sail minutes after completion of cargo. This is also common where terminal takes more time for calculating shore figure loaded on board.

3) The break-up of quantities not yet finalised. Sometimes the break up quantities for a commingled cargo is not finalised. In such case charterers may request owners to have the bill of ladings signed later by agent on behalf of master.

1) The LOA should highlight the fact that “bill of lading should be signed in strict accordance with the mate’s receipt”. And while we put this in LOA, it is prudent to double check for correctness of details in Mate’s receipt.

2) LOA should also instruct the agent to send the draft copy of the B/L to the owners for their approval before signing it.

3) LOA should instruct the agent to sign the bill of lading in strict compliance with the terms of the relevant charter party.

4) LOA should give as much detail to the cargo as possible. Each bill of lading to be signed by agent would require a different LOA. If the break up quantities are not finalised by the charterers, Master may require to issue a common LOA for each grade and later issue LOA with split quanities.

Master should be more cautious with the letter of authorisations if the agent signing the bill of lading is not appointed by the owners.

If Master has to sign the bill of lading, there are few things he should be aware of and conduct himself in a certain way.

3. Date of Loading: Date of loading might look a small thing but wrong date on bill of lading can have major implications. Date of loading should be the actual date on which cargo was loaded on board. If the loading took more than one day, the date of completion of cargo should be inserted. If previous or post date is inserted into the bill of lading, shipowner might be at risk of claims from cargo interests. That is because the value of the cargo varies each day. Cargo buyer may have to pay more or less amount to seller depending upon the change in cargo price for that day. Whatever the change, someone (Buyer or seller of the cargo) will be at loss and they would pass this loss to the carrier. Even P&I clubs do not entertain these claims and these would finally be out of pocket expenses for the owners.

5. Freight Prepaid: There are usually one of these two statements regarding freight that would be bill of ladings. “Freight Prepaid” or “Freight payable as per terms and conditions of relevant charter party”. Clause “freight prepaid” implies that carrier has already received the freight. Master must never sign bill of ladings with the clause “freight prepaid” without express permission from the shipowners. This is because of obvious reason that if the freight is not paid yet, you do not want to sign a legal document that states otherwise.

A Master in his career can come across number of different kind of pressures to sign a bill of lading that he is not suppose to sign. I personally have come across to some of these.  Let us see what these requests can be

2) Request to sign blank or incomplete bill of ladings

In one sentence, the request must be denied. We have discussed earlier in this blog ,  the possible reasons for this request. In most cases the reason for this request is insufficient data due to EDP. Master should inform the owners and charterers if any such bill of lading is presented to him for signing.

4) Request to retain an original bill of lading on board

If a request is made to proceed to a port different than that mentioned in bill of lading, master must inform the ship owners. Apart from that he must proceed only when ship owners have safeguarded their interest. There are two risks involved in such a request. first, one of the original being presented at port of discharge stated in bill of lading. Second, claim for deviation to another port. Ship owners has the arrangements to deal with such requests, such as they can ask the shipper to re-issue the bill of lading after destroying the previous one. Whatever the arrangements,

The practice of discharging the cargo against a LOI (Letter of indemnity) is so common specially in tanker trade that this can trick masters. Masters must ensure that direct request from charterers/shipper to discharge the cargo against such LOI should not be considered. Master must receive such instructions from the ship owners. If vessel is on time charter, charterer would receive the LOI from shipper or sub charterer and instruct master to discharge the cargo. These instructions might look something like this

In these cases, sometimes owners need LOI in their own format. Also such LOI from shipper or sub-charterer is indemnifying the charterers but not the owners. Owners are not under any contractual obligations with sub-charterers and such LOI might not be enough to protect owner’s interest.  So in this case owners might need a separate LOI in their format from the charterers (time) of the vessel.

Very nice explanation sir. Could you clarify one more thing? If at the discharge port, if 3 persons come with the original B/L, whom shall the cargo be discharged to?

sir this actually happened with us at romania but i was cadet at that time so did'nt have much knowledge then but we called p& i club after consultation with owner and they told u s to file a police complaint in dock station with agent and discharge cargo in port custody.

These cases are rare these days but it can sometimes happen. Following the charterers & P&I instructions is the best thing to do in these cases as you pointed out.

On tanker ships, and about date on Bill of ladings, the following questions arise as when is to consider the correct date of the bill of Lading. When the valves in the manifold are shut? when shore and ship quantities are reconciled? when hoses are disconnected?, when the time of completion of loading is agreed and reported in the SOF?

It is loading completion time & date as reported in SOF.

JUST TO CLARIFY IF A VESSEL IS IN TIME CHARTERS, AND HE HAS BEEN ASKED TO DISCHARGE CARGO ON PRESENTATION OF LOI,THEN HE MUST RECEIVE 2 LOI's, One from Shipper or Sub charterer indemnifying the time charterer and the other one from Time charter himself to indemnify the owners??

Both points are very relevant and accurate.

Would it be acceptable to re cut BL's up partial discharge reload for tanker business. Assuming the reload makes a material change in the over all cargo

If the partial cargo is to be discharged at some port, usually the B/L will be separated in such as way that one B/L does not have the cargo for two or more ports. So if the cargo of B/L number 6 is to be dischraged at Antwerp and rotterdam, then B/L 6A can be for Antwerp and B/L 6B can be for rotterdam. Now if after dischraging cargo as per B/L 6A, more cargo is to be loaded in B/L 6B to make it as different comodity, B/L 6B need to be cancelled and returned to the ship owners and a new B/L need to be drawn covering the cominglled (& new commodity) cargo.

Sir,can master authorise Chief officer to sign the B/L in any case, the same way he authorises agent in case of EDP?? If No,then why?This question asked for master's orals in Spore.

Hello Captain, A chemical tanker has load ulsd and master has signed B/L cllean on board. The draft survey figure at port of loading show a difference of -20 MTS and draft survey figure in the port of discharging show a difference of -18 MTS. The B/L quantity is 20000MTS. Which are the measuring to be taken by master at loading and discharging port?

Very skilled and knowledgable replies indeed!. One question; Are there any examples on LOI's being enforced at arbitration or in a Court of Law?. Or is the only threat loss of reputation for chrts ?

Is there any contradiction if Bill of Lading stated wording "Clean on board" and Master's remarks simultaniously. Is there any potential problem to carrier? (Vessel)

Hello! I would like some help on this case: Vessel on a single voyage T/C loads steels and according to the c/p liner terms B/L are excluded, but shippers presented for signature to the master, mate receipts with liner terms incorporated, the very last moment prior unberthing and having pilot on board and master in the heat of the moment signed M/receipts. What further actions will be made from office end in order to protect vessels – company interests? Are valid the Bills of Lading will be issued under the liner terms Mate receipts signed by the Master?

What if figure are wrong in EDP and the agent is instited to sign...what to do..???