Q.What is condition of class ? 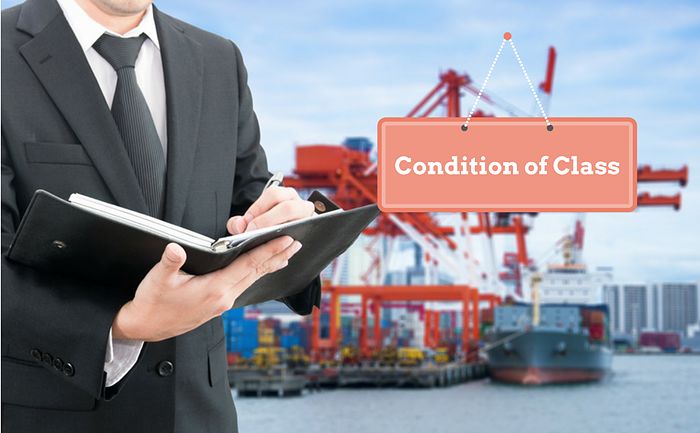 SOLAS chapter II, regulation 3-1 requires that ship need to be constructed and maintained as per the requirements of a classification society.

This means that during construction of a ship, classification society makes sure that the

After successful verification of these elements a "Certificate of class" is issued to the ship.

"Certificate of class" only deals with ship structure and machinery of the ship.

Now during its life, a ship may have issues with ship's hull and/or machinery. For example

There are many more such examples and situations. In such cases, clearly ship is not complying with the rules of the classification society.

But if the classification society revokes the "Certificate of class", the ship would not be able to sail.

So instead, a class surveyor attends the ship and suggests and/or verifies the temporary arrangements. After the said temporaray arrangements are in place, he will allow the ship to sail for one voyage or for some time period.

Class does so by issuing a "Condition of class", Which means that to be able to retain the class, the said defect need to be renewed before the specified period.

This way the "certificate of class" remains valid but with a condition.

When the defect is rectified, class surveyor will attend the vessel and verify that. After successful verification, he will delete the condition of class.

In case of repair of structural damage, such as to hull, class may require a class surveyor to monitor the repair.

In any case, if the condition of class is not removed before the said period, the certificate of class will become invalid and the ship will considered to be unseaworthy.

Popular questions and their answers