How confident are you about your ODMCS ? 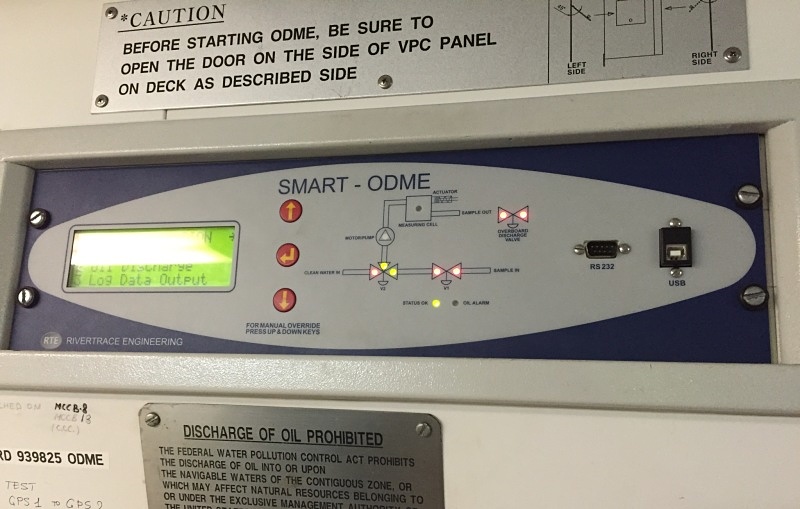 It is general practice among many seafarers to test the ODMCS for only IRD, but as I have pointed out, the regulation require the ODMCS to stop when total oil discharged limit exceeds and thus this is an equally important test too.

Test for Instantaneous rate of Discharge

The formula for IRD is

For ODMCS discharge valve to open, the IRD should be less than 30 L/NM and we just play with oil content, flow rate and speed (enter these values manually) to get the IRD to say 29.8 L/NM and discharge valve should open. We then increase the oil content a bit to make the IRD 30.1 L/NM to see if the discharge valve closes. Pretty simple. However this is just the simulation test which just tells us that the computing unit of ODMCS is working alright.

So if the vessel was carrying 45000 m3 of oil cargo and oily mixture are formed from washing or ballasting these tanks, the total oil that can be discharge through ODMCS is 45000/30000 which is 1.5 m3 or 1500 Ltrs. This figure need to be entered in the ODMCS  before actual run of ODMCS.

Even though there may be some other small tests like power failure test etc. Checking and testing the ODMCS and associated components as mentioned above would most likely ensure that your ODMCS would be ready when you require it.

My ex-husband and I had always managed to stay friendly after our divorce in February 2017. But I always wanted to get back together with him, All it took was a visit to this spell casters website last December, because my dream was to start a new year with my husband, and live happily with him.. This spell caster requested a specific love spell for me and my husband, and I accepted it. And this powerful spell caster began to work his magic. And 48 hours after this spell caster worked for me, my husband called me back for us to be together again, and he was remorseful for all his wrong deeds. My spell is working because guess what: My “husband” is back and we are making preparations on how to go to court and withdraw our divorce papers ASAP. This is nothing short of a miracle. Thank you Dr Emu for your powerful spells. Words are not enough. Email emutemple@gmail.com Phone/WhatsApp +2347012841542.